Multimedia eLearning program authored by: David Anthony Johanson ©  – All written & graphic content on this site (unless noted) was produced by the author. Add: 2.0  For an alternative graphic format presentation, please visit: https://sciencetechtablet.wordpress.com/tag/commercial-jet-airliner-obsolescence/

[ Disclaimer: David Johanson is a former Boeing scientific photographer and currently has no stock holdings or a financial interest in: Boeing, Airbus or any other companies referenced in this program. Research in this article has been cross referenced using at least three sources, however, all perspectives and opinions represent only the viewpoints of the author.]

.
Like seeing a mirage in the distance, shimmering sunlight reflects off rows of metal fuselages densely packed in the summer light. A surreal scene of Boeing jet airliners dominates the view, while forming a metallic wall around sections of a regional airport. 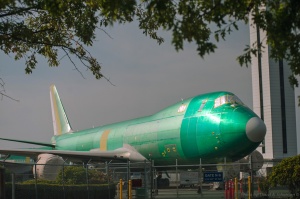 Billions of dollars worth of jet airliners are now double parked around Paine Field, Snohomish County Airport, in Everett, Washington. “This development indicates the current success, Boeing is having at landing airliner orders and the result you’re seeing represents a record amount of aircraft production,”said Terrance Scott, a spokesman for Boeing Commercial Airplanes.

He said the Company is leasing this space from Paine Field so that planes can have the remaining work completed and be ready for delivery to their customers — also, this isn’t unique to Everett, but is happening at Boeing manufacturing facilities at Renton Field and at Boeing Field in Seattle.

“Boeing has always been a good neighbor and a fine customer for the airport, they are currently leasing areas to park their aircraft and the revenue generated is appreciated.” said Dave Waggoner, Airport Director at Snohomish County Airport — Paine Field. 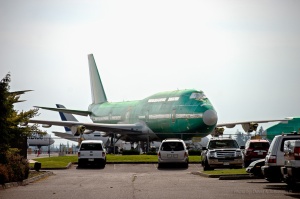 Could The New Normal Be Shorter Aircraft Service-Life For Airliner Fleets?

Recently, published reports noted a shift towards an assumed obsolescence and accelerated scraping of newer airliners — well before structural integrity or air worthiness becomes a problem, middle-aged aircraft are experiencing vulnerability to an early end-of-life. Clearly, accelerated scraping of newer aircraft is not due to any structural concerns, but rather, cyclical conditions of the industry. To appreciate these concerns a review of an airliner’s operational lifespan may help clarify some of the issues.
   

Aircraft manufactures use pressurization cycles to determine an airliner’s operational lifespan. A pressurizing cycle includes three distinct aircraft flight activities — takeoff, climbing until it reaches a cruise altitude and then landing. During this process, air is pumped into the fuselage to pressurize the cabin for passenger comfort. This repeated pressurization flexes or expands the fuselage — consequently stress is put on various connecting components, including fasteners and rivets — which helps to hold the structural integrity of the plane together. After a certain number of landing pressurization cycles, stress or metal fatigue can begin to develop, eventually causing small cracks around the fasteners. Pressurization/landing cycles mainly concern the life of an aircraft’s fuselage, wings and landing gear.

The interior of fuselage section, showing perpendicular rings, which are called frames.

 
The interior of fuselage section, showing perpendicular rings, which are called frames.

Maintenance schedules and lifespan of jet engines are measured in the number of flight hours. Aircraft engines, followed by landing gear and then avionics are the most valuable components for part-out and dismantling specialist operations. Ultimately, engine condition is the major factor in an owner’s decision to part-out an aircraft.

.
 For short flights, single or smaller double aisle craft are used to carry passengers, which may go through many landing or pressurization cycles for everyday operations. The more takeoffs and landings, means a shorter operational lifespan for the plane. On long overseas flights, wide body or jumbo jets such as 747s experience fewer landing cycles. These larger airliners, especially ones use for cargo operations can have longer lifespans of upwards of 20 or 30 years. In the U.S., the FAA requires an initial inspection on Boeing 737s, which have 30,000 takeoffs and landings using electromagnetic testing. Mandatory inspections are required for finding cracks in the fuselage or metal fasteners.

Boeing has a history of ‘over-engineering’ components of its aircraft, which is actually a good thing for ensuring passenger safety and for an extended service-life of the aircraft. Historical evidence of this conservative engineering practice is documented in WWII archival film footage of blown-apart B-17s returning from a mission and safely landing. There are more recent examples of Boeing commercial aircraft surviving dramatic inflight catastrophic failures, with most of the passengers and crew landing safely.

What are the current forces, which hasten the end-of-life of a commercial jet airliner? Recurring cycles or patterns of economic and technological events influences the commercial aircraft industry on a daily basis. Various ripple-effects of these cycles can quickly alter new and used aircraft asset valuation. Airline leasing companies have a major influence, in providing their customers with the aircraft assets they need. Unless the buying customer has solid credit, it’s doubtful they can secure financing for previously-owned airliners. Also, tax incentives exist for Airline companies to use depreciation right-offs by decommissioning all but the most advance aircraft assets.

 
Maintenance requirements are a long-term, yet fluid, financial concern for a company’s airline fleet. The newer designed aircraft are manufactured with significantly fewer parts than previous models. Consequently, reduction in parts has an impact on reducing maintenance expenditures — including smaller service crews, hours spent on inspection and a reduction of overall repairs. Also, spare parts inventories for maintaining the aircraft’s optimum performance can substantially be reduced compared to an older aircraft. The cost savings benefits are compelling incentives for eliminating older, higher maintenance, aircraft assets.
 

As mentioned previously, the considerable reduction of parts used in manufacturing newer aircraft provides an immediate benefit of up to 20 percent weight reduction. Without compromising strength or aircraft structural integrity, the cost savings from less weight begins the day an airliner is put into service. Traditionally, fuel-efficiency is the “holy grail” used for selecting an aircraft — the amount of fuel-burn affects the daily operational cost of an airline company. After a decade of service an older airliner reaches mid-life, it may require upgraded and modification conversions to the aircraft’s wings (winglets) or need new fuel-efficient jet engines. However, these conversions reach a threshold of diminishing returns from such investments. As a result, keeping an older aircraft competitive with newer models may not pay off at a certain point. That’s when permanent retirement and parting-out the airliner begins to make economic sense and the aircraft’s end-of-life management begins. 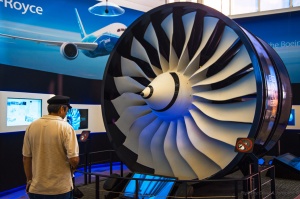 The most perplexing problem facing all commercial aircraft is how to ensure its critical avionics systems continue to evolve and stay up-to-date. Avionics provides the central nervous system or a central processing unit (CPU) framework for a commercial aircraft. It’s a marvelous matrix of advanced electronic systems technology, which constantly communicates with itself, the pilots and the outside world. More so than any other components making up an aircraft’s technological system, its management and functionality duties are beyond comparison. Each year avionics components physically contract in size, yet they expand immensely in functionality and system management.  

Here’s an example to help clarify this dichotomy of physical contraction and expansion of technical functionality. Your smartphone can be used as a basic representational model for avionics obsolescence. The phone you’re holding in your hand has a superior mobile graphics processor and sheer number-crunching power advantage over IBM’s Deep Blue supercomputer of the late 1990s. Yet, you can hold your phone in hand, compared to Deep Blue, which was the size of a large refrigerator. However, advanced your smartphone is today, a year from now it’ll be obsolete and two years from now… a quaint antique.  If you grabbed your smartphone and considered the example, you just experienced Moore’s law of observation — ‘over the history of computing hardware, the number of transistors in a dense integrated circuit doubles approximately every two years.

Now, imagine trying to update a complex system such as an airliner’s avionics bay, in five-years, 10-years or 15-years. The installation and the majority of electronic systems are not made by the Aircraft’s original equipment manufacturer

(OEM) such as Boeing or Airbus. Moreover, the vendors or suppliers 10 or 15-years from now who were the OEM, may be out of business.  In the meantime, new replacement components may have to substitute the obsolete equipment. However, the aircraft industry is highly regulated by government agencies, which require strict certification of equipment modifications. As a result of these constraints, aircraft manufacturers such as Boeing, developed obsolescence management strategies to help mitigate these ongoing concerns. But there are always unforeseen obstacles and many moving parts to coordinate before the necessary electronic components are available when needed. Clear, transparent communication is necessary between internal engineering and purchasing departments. Successful collaboration at all levels can present major challenges, especially if the objectives and timetables are not each group’s priority.

So aircraft avionics are the vulnerable underbelly of airliner obsolescence — with financial consequences associated with accelerated, technology — necessitating complex and expensive electronic upgrades.

Used Aircraft Components, Harvested For Premium Returns, Is The Retired Airliners Last Call In Service Before Its Final Destination.

Perhaps aircraft boneyards are flying under the radar as virtual gold mines, as refurbished parts are easily sold at market value. The savings of buying used, over new aircraft parts is incentive for expanding the market. Engines, landing gear and avionics are the most expensive components of an aircraft. These prized components are a highly valued commodity and are quickly snapped up. Specialized systems are not manufactured by companies such as Boeing or Airbus, but by outside OEM. Parts sold brand new by the manufacturer are considerably more expensive than buying used.
 

Next Generation aircraft such as the Boeing 737-600 and even a 737-800, which was reported to have had a hard-landing, reached their end-of-life as scrap.  Also, Airbus has had similar, newer single-aisle aircraft models reached their final destination in the aviation boneyard.  Aircraft Fleet receivable Association (AFRA) estimates 600 commercial jet airliners are scrapped yearly. By 2023 it’s estimated the number of commercial airliners scrapped will reach 1000 per-year.

Efforts Of The Aviation Industry To Leave A Smaller Environmental Footprint.

In 2008, the Boeing Company reached out to Airbus in collaboration, with the goal to vastly improve aircraft recycling technology. Airbus estimates they are recycling 85 percent of the entire aircraft, the remaining cabin interior amounted to 15 percent and was the only materials added to landfills.

The best takeaway from the issues surrounding accelerated airliner service-life is that less fuel is consumed by the newer fleets. As older, less efficient aircraft are replaced — a 20 percent reduction in fuel emissions will not enter the atmosphere from the next generation aircraft replacements. If the world’s commercial airline manufactures continue to devote more effort towards efficient recycling of past generation aircraft, we can look forward to clearer skies ahead.         ~
 

*
Special thanks to The Future of Flight Museum, for allowing photos to be taken from their excellent observation deck. 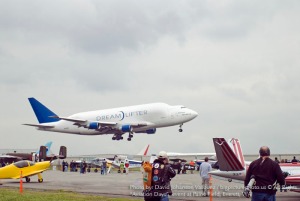 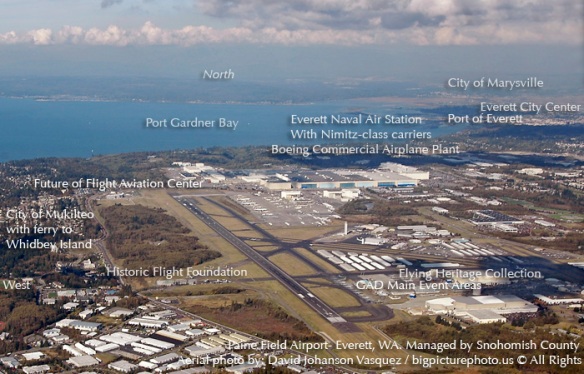 This link shows live air traffic anywhere in the world. View how congested the sky’s are over the world’s busiest airports.

2.  ) True    Newer aircraft are replacing airworthy, older aircraft due to much less operating cost, including fuel savings and maintenance issues.

9.  )  An airliner flying overseas route would most likely have fewer takeoffs and landings, due to the longer flight time required to reach its destination

10.)  Electromagnetic testing for finding cracks in the fuselage or related components

11.)   Fewer parts can result in an airliner weighing up to 20 percent less than older models, which can correlate to the same percentage of fuel savings. The maintenance cost is substantially lower allowing for more savings over older aircraft with more component parts.

14.)  Avionics   electronic components used for avionics may not be available or upgradeable due to obsolescence   upgrading obsolete avionics may require expensive redesign