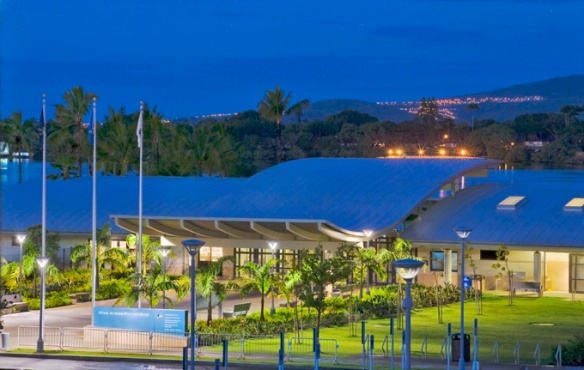 A low-light sensitive imaging sensor and a perspective control lens were used for capturing this dramatic predawn view of the Pearl Harbor National Monument’s new visitor center for – Seattle Architect The Portico Group. Photo by: David Johanson Vasquez © All Rights

Whether you’re a filmmaker, fine-artist or commercial photographer, you need to be resourceful in a full-spectrum of talents to have viewers take a serious interest in your work.

For the past 12 years I’ve made traveling to the Hawaiian Islands a priority.  In this tropic paradise, my experience is one of creative renewal, brought on by inspiration from the Island’s “Aloha spirit” and dramatic volcanic landscapes.

On the Island of Oahu, Pearl Harbor, has been a great interest for me. Some years back, The Portico Group — a Seattle architectural firm began exploratory work for designing a component of World War II Valor in the Pacific National Monument.

In 2008, I contacted a principal architect, Mike Ham at Portico with news of my planned travel to Oahu.  At that time, preliminary stages of design were just taking place and there wasn’t much opportunity in photographing the site. Undeterred, I made arrangements for a window seat on a Hawaiian Airlines, Boeing 767, which would allowed access for aerial photographs of the Pearl Harbor site. Fortunately, clear weather did allow me to photograph the Monument on approach to Honolulu Airport. 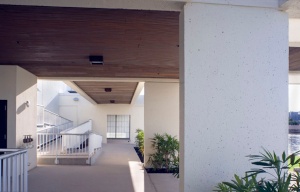 There are beautiful architectural design elements within the visitor center. This one captures a Zen like composition. Photo: David Johanson Vasquez

Upon returning from the trip to Oahu, my aerial photos were emailed to the architect.  I followed up with a phone call … although the feedback was polite it was revealed the timing was still too early in the project for the firm to consider using photography.

If you’re a dedicated photographer, you realize the value of patience and learning from both success and failure while reaching for your objective. This applies to resourceful technical and creative approaches, which are used to achieve your vision and the equally challenging strategic applications used for marketing that unique vision. 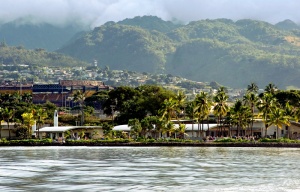 Looking back from the Arizona Memorial towards the new World War II Valor in the Pacific National Monument Visitor Center. Photo: David Johanson Vasquez © All Rights

By emailing new photographic work over several months, I kept in contact with Portico and learned in 2010 that the project was nearing completion.  Unfortunately for me, I would not be able to attend the December 7th dedication and would be arriving in Hawaii two months later. It was decided by the architectural firm, that a local architectural photographer would be hired to shoot the new center. 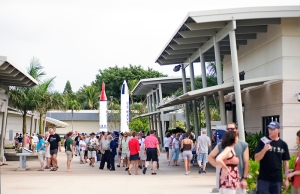 Undaunted, I asked for the opportunity to photograph the visitor center in February, with no financial obligation to the firm.  The architect agreed to this offer by providing me with a National Park Service administration contact in Honolulu. 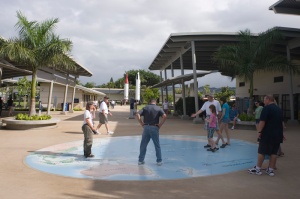 Youth and elders view a globe showing where the conflict in the Pacific was fought during World War II. Photo: David Johanson Vaquez ©

A couple of weeks before flying to Hawaii, my contact allowed me to view images the Honolulu photographer took back in December. The photo coverage was good, with many angles of the new center shot, using various times of day for best light.  This review confirmed my approach would have to be a new approach from what was previously used. With the help of some intense research methods using Internet images and information gathered, I became familiar with the site’s geographical attributes before arriving. 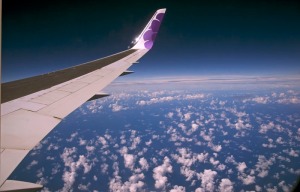 At 30-thousand feet in a Hawaiin Airliner Boeing 767, we begin our decent as we approach the Island of Oahu. Photo: David Johanson Vasquez ©

The February, 2011 flight to Hawaii was pleasant and as the plane was approaching Oahu I could clearly see Honolulu. However, after de-boarding the plane, blue sky had given way to a partial mixture of dark clouds.  Phoning the national park services, contacts, the staff informed me the forecast was not promising for my intended early morning photo shoot. So I decided to be flexible for the next week, while watching local weather forecasts for an early morning photo opportunity. After a few relaxing days under a blend of tropical sun mixed with passing clouds, a favorable forecast came in for the assignment. 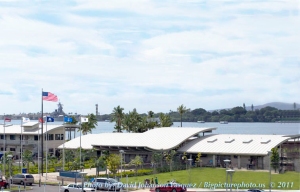 Entrance to the Pearl Harbor National Monument’s Visitor Center. The Battleship Missouri & USS Arizona Memorial are in the background.

Traveling in darkness I arrived at the site, prepared to use the predawn light.  Scouting the visitor center a few days before, revealed a hill, which would be ideal as a shooting platform. Using some available artificial low light, I took a series of carefully composed photographs. Soon twilight gave way to sunrise, revealing a vibrant panorama backdrop of multicolored clouds in my viewfinder.  As morning light lit the visitor center, I joined the legions of visitors descending upon open gates. 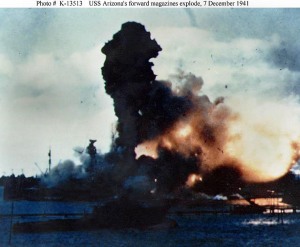 The forward magazine of USS Airzona exploded after being hit by a Japanese bomb, December 7, 1941. Frame clipped from a color motion picture taken from on board USS Solace.
Official U.S. Navy Photograph, National Archives Collection

The “Tree of Life” sculpture, is used as a universal symbol for renewal and rebirth of life.

The shores of Pearl Harbor, and the Arizona Memorial, have persistently drawn me to this honored site. Several members of my family have served in the military, and I have gratitude for the dedication and sacrifices during their time of service.  What began at this historic site, as a surprise Japanese attack, on an early December 7, 1941 morning, brought our country into WWII.  The individuals, who were under fire here, exemplify the strongest dedication to preserving and defending our nation, particularly those who gave the ultimate sacrifice. An unseen force pulls me to this place, and I offer homage to what happened at his historic site.

This photo taken in September 1941, is part of another essay on Cuba and Panama, which was impacted by the Pearl Harbor attack.

The first photo essay I posted using WordPress was about my mother as a young girl traveling to Cuba and then Panama by a steam-liner in September of 1941. My grandmother was taking my mom and her baby brother to the Canal Zone to meet with my grandfather who was stationed there with the Navy. They had only been united for a couple of months before Pearl Harbor was attacked. My mom along with all Americans were forced to evacuate, for fear of a Japanese invasion. A German U-boat shadowed the ship my family was evacuated on in the Gulf of Mexico and I’ve included a link at the end of this essay for a related story on the Pearl Harbor attack. 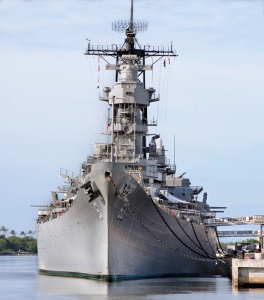 USS Missouri “Mighty Mo” Iowa Class Battleship – The last battleship built by the U.S. and was the historic site on which the Japanese Emperor signed the surrender agreement to end World War II. Photo: David Johanson Vasquez © All Rights

My appreciation for 20th century history is another reason for my interest in this National Monument. Historically the Pearl Harbor attack represents a great milestone, a solid beginning as Pax Americana —[the U.S. ascending position as undisputed world leader for the second half of the 20th Century.]

Once inside the Monument’s entrance, helpful park service staff greeted me, as they were expecting my visit. The beautiful tropical morning light illuminated the site ideally as I photographed the visitor’s center from all the best angles.

Leaving Pearl Harbor after a successful shoot, I felt fortunate the weather had been so cooperative, as it produced a combination of soft, diffused light with interesting clouds to ad sky texture. 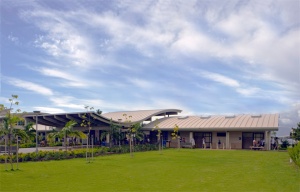 For my remaining visit on Oahu, was an enjoyable and relaxing time with family and friends.

We all came together for couple of nights to celebrate my dad’s 80th birthday in Hawaiian style with great food, live music and Hula dancing. 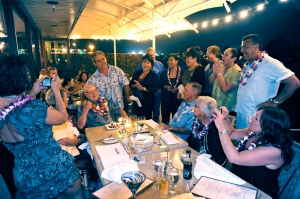 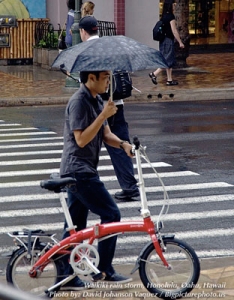 Of course I found some time for my personal photography work. Hawaii has some remarkable subject matter, which is always worth discovering.

Beside the gorgeous tropical landscapes there is a diversity of Ocean Culture to experience.

On the Island of Oahu there are urban scenes with blends of South Pacific, Asian and North American cultures creating a unique, Pan-Pacific experience.

One of my creative specialities is night or low-light photography. The moon over head gave a halo rim-light on the palm trees. 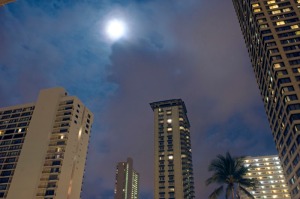 Honolulu has some high-density urban environments with high-rise hotels and condominiums.

Perhaps the sense of renewal I experience while working and playing in Hawaii is due to this unique fusion of culture created on the Islands. 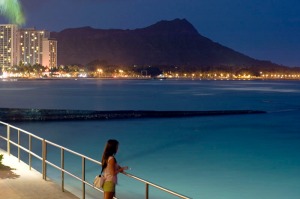 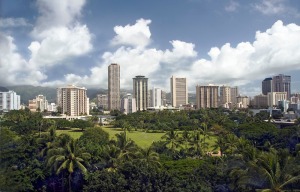 Another influence I draw from this land is the constant vibrant growth of plant life — along with continuous volcanic activity, which never slows down as it furiously creates new land on a daily bases.

Upon returning to a cold winter in Seattle, several days went by before a meeting could be scheduled with the Portico Group.  Once the meeting did take place, a couple of lead architects, along with marketing manager, Leigh Tucker, reviewed the photographs I brought in.  The response was enthusiastic and appreciative for the photographs presented, along with compliments for my approach of using subtle light to help illuminate compositions. Two dramatic photographs were purchased at the presentation in order to meet a deadline for an architectural awards competition-taking place that week. These initial purchases covered all my expense of travel and lodging  while on Oahu. Within days, more images were acquired from me, which featured views not included in the earlier photography completed at the December dedication event.

This rewarding photographic experience was a classic lesson in fortitude, patience passion and not giving up, no matter how challenging the odds are. 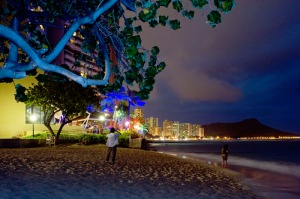