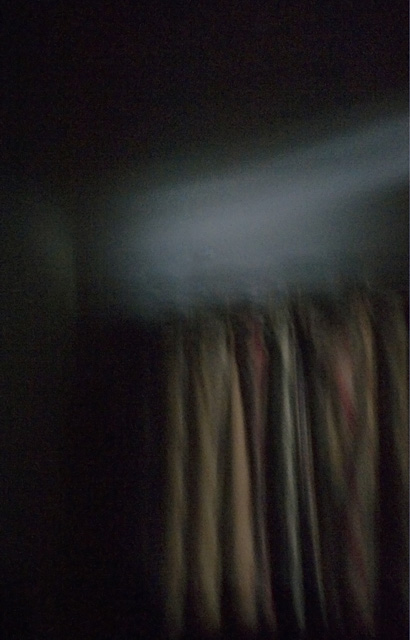 Woken by a sudden sound within the darkened cabin revealed a strange glowing light moving across the ceiling.

Photos and story by: David Johanson Vasquez  © All Rights

For over 50 years my wife’s family has owned a two-bedroom cabin next to the Naches River within the Eastern Cascade Mountains. The cabin was built within Wenatchee National Forest, early in the last century and is part of a historic cabin community.

From Seattle, the drive takes less than three hours via Highway 410, and brings you over towering Chinook Pass. This Pass intersects with the glorious Pacific Crest Trail, which travels over mountain ridges from Western Canada to Mexico.  Looking west from this panorama reveals a stunning, up-close view of the iconic stratovolcano, Mount Rainier. Descending Chinook pass, you travel a steep grade, past scenic waterfalls tumbling from lofty jagged mountain peaks. Eventually you come to a mountain valley, which follows the American River before it joins forces with the larger Naches River. 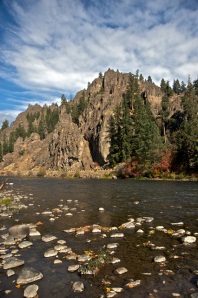 Naches River with Highway 410 in background. 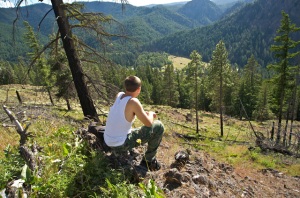 I’ve always admired this cabin’s secluded setting, hidden underneath stands of mammoth pine and fir trees. The nearby geography is fascinating, if not a bit eerie; above the site are mountain peaks, surrounded by countless basalt columns of rock resembling giant statues frozen in some stoic pantomime. Wild winds occasionally blow through creating deep resonating sounds as they brush past the rock columns. 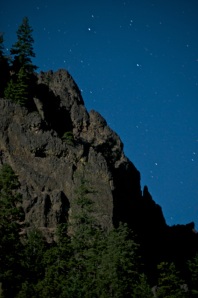 A full moon illuminates basalt walls standing over the valley bellow. There are many natural caves in the area, one in particular is massive and a favored destination for hikers during hot summer days. In earlier times, Native American Indians used it for shelter as well as ceremonies when traveling through these lands to reach Chinook Pass, for passage over the steep Cascades. 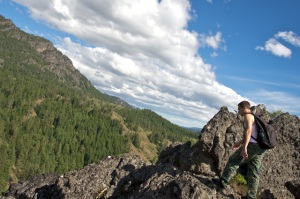 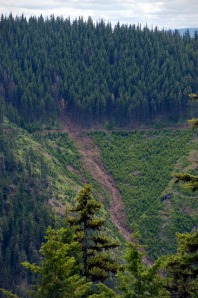 Slide area caused from a broken snow dam. The event shot boulders, trees and a torrent of water down ravines, causing a 50' high tsunami to rush by our cabin.

Last year, a few miles down Highway 410 from our cabin, a massive landslide made national news as part of a mountain gave-way; destroying several homes, diverting the Naches River and buried a large part of the highway, which is now permanently detoured across the river. This past spring, another natural event took place with a creek next to our cabin.  A sudden, disastrous occurrence nearly wiped out several historic cabins. Last winter’s record snowfall had been so great; it created huge dams of water when warm spring weather finally arrived. A mountain peak miles above the cabin had its massive snow dam burst, sending tons of ice, mud and trees down a series of steep ravines leading toward the valley bellow.  As this blast of mud and trees approached lower elevation, it turned into a terrifying 50-foot high tsunami.  Choked with tons of fast moving debris, it gouged out a new shoreline, ripping and tearing thick trees from their foundation and depositing them onto Highway 410.  Amazingly, no deaths occurred from this event and it only caused minor damage to nearby cabin, fortunately sparing ours from harm. 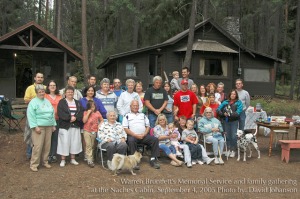 The cabin has seen many gatherings of family and friends.

For me, whenever I return to our cabin, I feel renewed;  relaxed by hearing an enchanting melody created from the babbling creek while blending with sounds of wind blowing through evergreens and smelling fragrant scents of pinewood.  I’m not quite sure why, but many of us who come to visit experience vivid dreams when sleeping here.  Perhaps being able to decompress from routine urban activities, allows for a more natural dream environment. 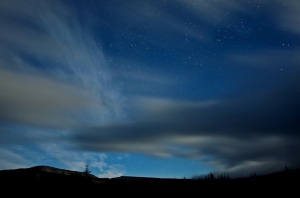 The twilight curtain is pulled back, revealing timeless constellations. 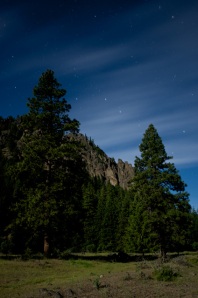 My sister-in-law, Kathy, whose best friend, Shelly, is known to have psychic abilities; she came up one weekend to the cabin a few years back with Kathy and my mother-in-law.  Apparently some unusual, unexplainable sounds happened, along with other strange events, giving them an impression — this cabin is a “spirit rich environment.”  They believed the main spirit presence was from my father-in-law, who had always favored the cabin and passed-on a few years before. Intrigued by the reported cabin event, I came up later that year with my cameras prepared and set them on long exposures in various locations, to capture any supernatural occurrences.  After making several attempts, I discovered, without using a hefty amount of imagination, I wasn’t able to find anything resembling a spirit presence in my photographs. Disenchanted with my efforts, I lost interest and forgot about the specter sighting.

A few weeks back, I returned with family members to the cabin for some quality R&R. There are many great hiking trails nearby with wonderful scenic views. We chose to hike past the community’s pioneer cemetery and beyond to a gravel road which leads to the mountains above us. Our hike was abruptly halted by what the river tsunami had done. We were shocked by how violently this rushing wall of water and trees, ripped apart what was once a well-built road, leaving a crater more than 300 feet wide. No longer usable, the Forest Service closed it indefinitely since they no longer have a budget to keep up all but the most essential roads.

Worn out from our hike under a warm summer sun, we made dinner and resolved to watch a movie. As we were about to begin our feature, an event happened which fixed our focus on a place near an antique Franklin stove. One of the pet carriers we brought with, made a sound as if a dog was inside, trying to push it open. Not one of our dogs were near it, so we were a little startled, but decided to laughed it off and began our video. 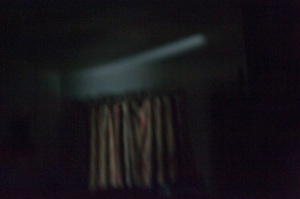 Mac ghost projection on the ceiling above the curtains. 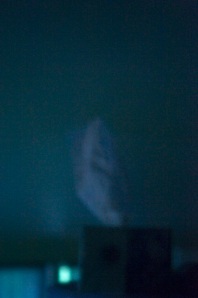 After our movie we were all tired and called it an evening to fall asleep. About 3:30 in the morning a sound woke me up. Peering into a dark room, I assumed I was awoken by snoring from a nearby family member. Trying to get back to sleep I began closing my eyes when some soft white light captured my attention. Appearing like fine mist, it shimmered while hovering above a set of drapes and overflowed to the ceiling. At first, I wasn’t sure if I was dreaming this, or possibly I was only half asleep while just imaging the event.  My next assumption was… perhaps it was caused by moonlight entering into the room, but how could it be coming in with all drapes closed?  Now I began recalling the alleged spirit sighting a few years back. As hair began standing on the back my neck, I laid there lifelessly as to not disturb the mysterious specter. This light seemed so unearthly, that it reminded me of years ago when I was photographing in Alaska’s Arctic region;  experiencing up-close, the surreal northern lights above me as it moved like some cosmic curtain across the sky. Collecting myself, I grabbed a camera and held it on top of my chest, pointing its lens at the floating light. Holding a deep breath, I took half a minute exposures. Mesmerized by the scene, I shot close to a dozen photos before gathering enough courage to approach the buoyant glow. Now, only a few feet away from the radiance, I saw some movement in an adjacent room. Turning my head slowly, I viewed my brother-in-law with his hands grasping his ipad as he worked on some project. The origin of this mysterious luminosity was now revealed;  it was light coming from his electronic display, being projected through two semi-closed doors. Partly disappointed and relieved at the same time by a false phantom sighting; I  became inspired by this event and began taking photos in the cabin’s predawn light to create a series of subtle compositions. 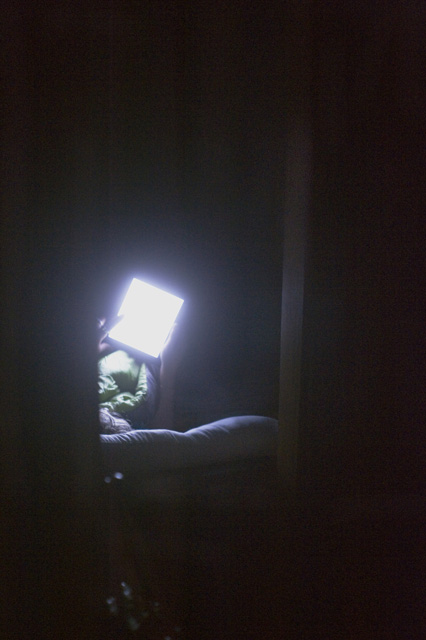 The source of the specter is revealed.

The next morning I used the mistaken spirit sighting for a spoof on my family, with a serious expression, I announced a supernatural encounter late at night, which I photographed.  After breakfast, I ran a cable from my camera into a TV to share what I had captured.  Eyes were now riveted towards the TV screen, waiting to see the alleged spirit. When photos began appearing, gasps were being expressed at what appeared to be a specter sighting.  Having successfully pulled off my prank, I then showed the last photo, which exposed the real culprit behind this hoax, which was my brother-in-law holding his “Mac ghost ipad projector.” About half the gathering laughed while others groaned at being spoofed by a supernatural story.

Now the cabin has one more campfire story to add to it its colorful list of tales, until the next one is experienced or manufactured.  Happy sightings…