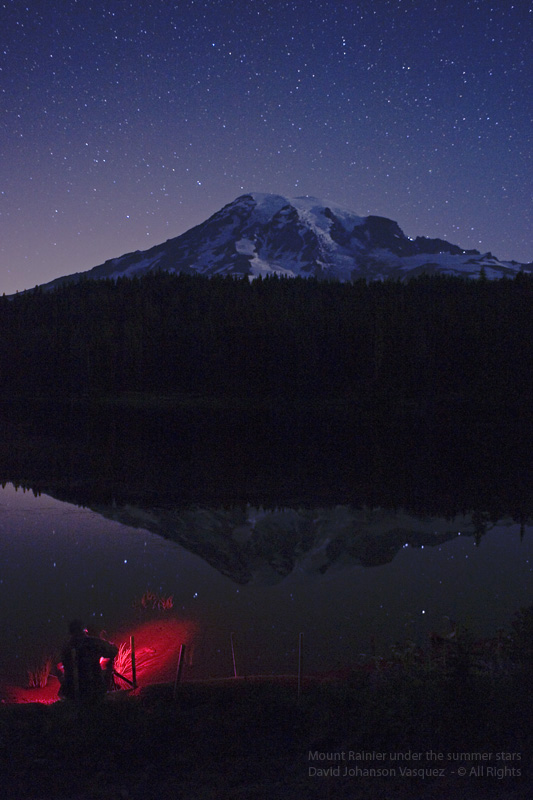 The author is a multimedia specialist, CTE instructor and a former Boeing scientific photographer. For an alternative formatted view of this program, please visit — www.ScienceTechTablet.wordpress.com

My photo wingman, Rick Wong and I headed into the heart of darkness in a quest for the Perseid meteor showers. Mount Rainier National Park, was our destination to use its iconic landmark for framing an infinite field of stars—far from the glare of city lights. Traveling at night in Rick’s new hybrid Ford Fusion, equipped with “information technology”—voice navigation, made it easy finding the park without using a map.

Arriving at our location, luminous stars lit up the night as expected, but we were surprised by some uninvited competition, which nearly stole the show. 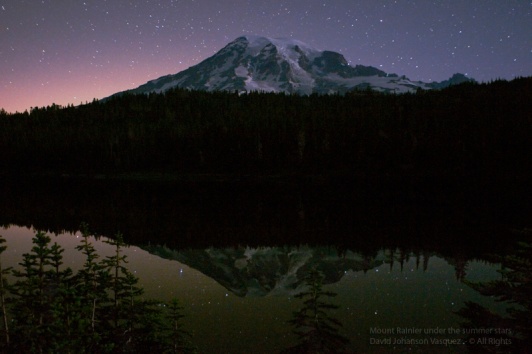 A stunning view of Mount Rainier reflected in Reflection Lake, with the summer stars overhead. The pink and orange glow on the left side of the mountain is light pollution emitted from the City of Tacoma, approximately 65 miles northwest.

We found an ideal location above Reflection Lake to begin our photo shoot, with one of the Cascade Mountain’s most famous stratovolcano in the background. An unexpected warm light was glowing behind Mount Rainier, which I reasoned, was a faint remnant from the earlier sunset. However, the sun had set at least four hours earlier, so it couldn’t be the source of the illumination. Rick suggested “its light coming from the City of Tacoma,” located about 65 miles away. During a 20-second long exposures used to take an image of the snow-capped mountain, I began thinking about the effects caused by light pollution.

With a bright moon rising, we worked fast to keep up with the changing light, until its intensity eventually overpowered the stars.

Just now, the moon was rising higher into the night sky, it too was causing us to shift focus on what to photograph. Like a giant diffuse reflector, the moon reflected soft, filtered light onto a previously dark, formless landscape. Moonlight was beginning to compete with the canopy of stars’ brilliance, partially masking crystal clear views of the Milky Way, along with some meteor sightings. So being photo opportunist, we used the moonlight to illuminate shadow-detail on Rainier’s south face. 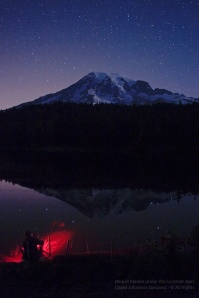 Like some sorcerer conjuring an intense cauldron of red light, the photographer adjusts his digital settings before Mount Rainier and her crown of stars above.

When a distraction, like a car suddenly rounding a corner occurs, it’s often an annoyance, which takes you out of the moment. My moment was taken by clusters of cars, with glaring lights as they came around a turn… just as the moon illuminated the mountain, as it was reflected onto a perfectly still lake.. Their headlights flooded the calm mirror-like water and stands of old growth trees beyond with glaring intensity— as I used my hands in an attempt to shield the lens from light flare. Finally, the cars diapered into the darkness with no more approaching vehicles until dawn.

Photo-illustration of micro light sources, which can cause light pollution by unintended spill-light.

Moving above the lake to find new angles for interesting compositions, I took notice of something not seen before. Lights of various colors were coming from photographers bellow me, created by their digital camera’s preview monitors and infrared sensors for auto focusing. With the low light-sensitive Nikon cameras I was using, these multicolored monitor lights, appeared like a bright flare on the long exposure images. Now, I had one more unwelcome light source to avoid, which required strategic timing in the photo’s exposures to minimize glare.

Again, my thoughts returned to the issues of light pollution. Recalling the time back home, when I attempted to photograph some constellations at night, only to have a neighbor’s motion sensor flood light, overwhelmed the backyard with brightness. The piercing light  forced me to find the last remaining, isolated shadowed corner of the yard.

My reminiscing was cut short by a distant, but bright, pinpoint of light from bellow Mount Rainier’s summit. Flashlights from mountain climbers near Camp Muir shined bright—like lighthouse beacons from the semi darkened rocks and glacier fields on the mountain. Even the faintest light can shine bright at night as was noted during World War II, when warships were forbidden from having any exterior lights on at night — including a lit cigarette, which posed a risk of being spotted from great distances by enemy submarines. 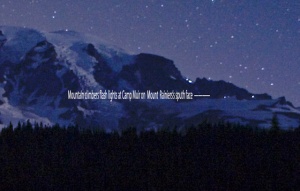 Lights from mountain climbers on the approach to the summit of Mount Ranier.

In less than a century of civilization’s reliance on electric technology: two-thirds of the U.S., half of Europe and a fifth of people in the world—now live where they cannot see the Milky Way with the unaided eye. You can appreciate how we lost our stellar view by seeing aerial photos taken from orbiting spacecraft and the International Space Station. These startling images taken of the Earth at night, reveal a man-made galaxy of artificial light, which cancels out much of the real one in the sky above.

Some years back, I was a part-owner in a small recreational ranch, in Eastern Washington’s, Okanogan County. Brining friends over from Seattle, it was often nighttime when we arrived. The instant of exiting the cars, was a startling event as the Milky Way’s intensity of light overwhelmed your senses. The “ranch” was remotely located, at about 5,000 feet in the mountains, near the Canadian border and 30-miles from the closest town. Days would go by where we didn’t see a car or even hear a small airplane go overhead… it was one of the most refreshing experiences of my life, to perceive nothing except wind going through trees and seeing only starlight at night for hours at a time. 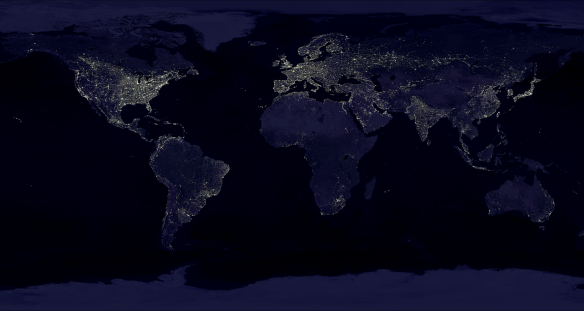 A television interview with the director of a major observatory in Southern California recounted when Los Angeles had its last electrical blackout —people were calling 911 and his observatory, with reports of strange, bright objects in the night sky. Actually, what the callers were seeing for the first time, was the Milky Way’s canopy of shining stars.

Besides forfeiting a life inspiring, wondrous view of the cosmos, there’s tangible losses associated with light pollution. Conservative estimates are—30 % of U.S. outdoor lighting is pointed skyward in the wrong direction, which wastes billions of dollars of electricity. The unnecessary practice of lighting clouds, burns more than 6 million tons of coal, which adds: harmful greenhouse gas emissions, along with toxic chemicals into our atmosphere and water.

Further scientific studies indicate wildlife is suffering the ill effects of excessive urban lighting. The City of Chicago has taken measures to turn off or dim its high-rise lighting to enable migrating birds to continue normal migration patterns. An increase in species of insects attracted to light along with rodents, which are drawn towards bright city lighting, is a growing concern to many scientists.

Heavy equipment product shots never look quite this good. Scheduled improvements to the viewing area above Reflection Lake, had some equipment, taking a nap, before going to work when the sun came up.

Municipal lighting codes are beginning to help define and eliminate unnecessary light pollution. Lighting enforcement can create a more pleasing environment, by reducing excessive urban lighting, which causes fatigue from glare and cuts down on unnecessary electric utility cost. Redirecting outdoor lighting away from the sky where it is needlessly wasted is a simple and easy solution.

Installing motion detector security lights are another efficient and productive mitigation strategy. For security purpose, a light, which is triggered by motion is much more effective for crime prevention than a continuous floodlight. Motion detector lights have a clear advantage of focussing our attention onto an area, which is triggered by a sudden change from darkness to bright-light.

The light intensity of the Milky Way is a breathtaking wonder to witness at night —` unrestricted light-pollution has faded this wonder from what was once a valued human experience. You can see the Andromeda Galaxy in the right 1/3 of the frame. Nikon D700 – Nikkor 28mm lens @ F3.5 @ 20 seconds August 11 11:48 p.m.

The encouraging news is… the key to reducing light pollution is a simple matter of basic education and action. Public awareness of over-lighting requires a minimal expenditure, which will quickly pay for itself in energy savings and perhaps return the opportunity to experience one of the greatest shows seen from earth. ~

Urban Sky glow: the brightening of the night skies over municipalities and communities, caused primarily from high-volumes  of collective, reflected light and poorly directed light, which is pointed upward or not shielded properly.

Light trespass: light falling or spilling into areas where it is not intended. Also know as “spill light” – as in municipal streetlights, which go beyond the intended illumination of street signs and sidewalks, causing an unwanted exterior lighting of residential homes.

Glare: A direct, bright or harsh light, which causes discomfort or pain. The effects of glare can be reduced or eliminated with the use of a shield or filter.

Uplight: Light angled inappropriately upward towards the sky and serving no purpose. Uplight washes out the night sky and reduces opportunities for astronomers and star-gazer to enjoy the beauty of the planets, moon and stars.