An example of a variety of architectural styles influenced by Vitruvius. Florence, Tuscany Region, Italy. Photo by: David A. Johanson ©

To see an alternative graphic view of this essay please visit: www.ScienceTechTablet.wordpress.com

If you would like to experience some ancient Roman music while viewing this essay, open one more browser and click on the  Roman music link provided below (Synaulia III, has Latin signing and soothing melodies)

The first historic footnote on Marcus Vitruvius Pollio, was not of his role as an architect —but for his military engineering service for another overachiever, Julius Caesar.

The floor plans from a Greek House – Vitruvius. Peter Lewis – Wikipedia project – image free to use with no copyright restrictions

Vitruvius first job description involved being in charge of a Roman legion’s heavy artillery —the terrifying Ballista or catapult. Ironically, this future architectural genius was responsible for destroying opposing structures that came before his weapons of mass destruction. You could say, Vitruvius, literally had a major impact on architecture throughout the arc of his careers.

Vitruvius’ date of birth is recorded around 90 B.C. and apparently the recipient of a broad-minded education — science, mathematics, drawing, music, law, rhetoric and history. He is believed to have apprenticed with a Greek architect, which gave Vitruvius the basic foundation and qualifications for becoming a subject matter expert (SME) on architectural principles.

A series of columns line a walkway at the Herculaneum site, Italy. 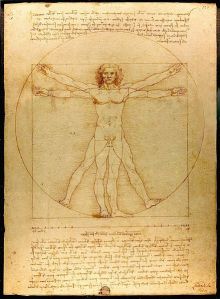 Vitruvian Man by Leonardo de Vinci was named after & inspired by Vitruvius. – This work is in the public domain in the United States, and those countries with a copyright term of life of the author plus 100 years or less.

It’s speculated at the time Vitruvius began circulating his writing, wealthy Roman citizen’s private libraries were accessible to him for specialized study in architecture and engineering.

An upheaval caused by the Empire’s civil and foreign wars channeled Vitruvius’ professional direction towards engineering military machinery. It may have seemed like an irony to him that his skills were being used to occasionally destroy architecture, rather than create it. 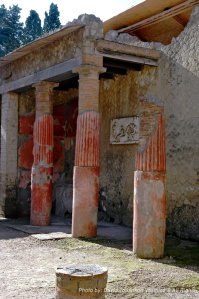 Opportunity Opens A Door For Vitruvius’ Career In Architecture

Following the assassination of Julius Caesar in 44 B.C., Vitruvius found employment with Caesar’s nephew and successor — Octavian. Another decade of Roman civil war and the eventual defeat of Marc Anthony and Cleopatra at the Battle of Actium in 31 B.C., led to a Pax Romana (Latin for “Roman peace.”) 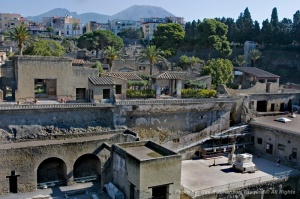 Julius Caesar’s father-in-law residence – Villa of Papyri is located at Herculaneum, which was buried along with the city of Pompeii in 79 A.D., by the volcano Vesuvius, seen in the upper top frame.

With Octavian as the undisputed ruler of the Empire, he was granted the title, Augustus the Emperor of Rome. Augustus channeled Rome’s wealth towards cultural, civic and public works development. This reinvestment for Rome’s glory, eventually gave Augustus bragging rights, as he is quoted, ‘I found Rome built of bricks; I leave her clothed in marble.’ Augustus’ civic benevolence finally created an opportunity for Vitruvius’ great engineering and architectural contributions to move forward. 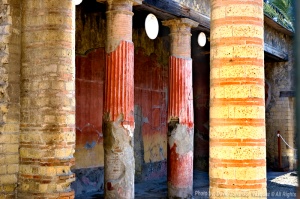 An example of Roman ingenuity is in using brick for most of a building’s construction, then a facade of marble or limestone is applied and finally followed by vibrant color applications.

The white outline of the architectural structure show where the colors were applied — from inside a residence at Herulaneum site, Italy.

As the saying goes — behind every great man there is a great woman. It’s Augustus’ sister, Octavia, who sponsors Vitruvius to write the architectural treatise.

Interior of residence in Herculaneum. Mosaics were used to bring the outside world indoors.

Officially, the Books of Architecture are dedicated to Augustus, who uses them wisely to help create a marvelous metropolis.

Vitruvius, throughout his career keeps a low profile, perhaps due to observing what envy and jealousy could inflict on the Romans who attempted to shine too brightly.

Statue in the ancient port city of Ostia Antica, next to the Tevere River, Italy. 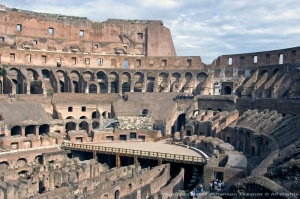 Cross section of Coliseum. This two-thousand year old stadium is still in use today, with major music concerts & various events open to the public.

In antiquity, Hellenistic Greek architecture sets the standard for beauty, quality and form. The Greeks, inspired by much older civilizations established near the Mediterranean, refined architecture to its classical ideal. However, precious little had been written down regarding the styles and standards of Greek architecture, until Vitruvius ambitious efforts were realized.

Ionic capital on a Roman column

As a result of non conforming standards, instructional integrity of buildings could suffer with disastrous consequences, as well as the aesthetic beauty of religious, civic and private buildings.

Vitruvius realizes the great advantages and value of researching classic Greek architectural techniques and styles. By developing a comprehensive series of books on the methods and theories of architecture — ancient Roman, as well as contemporary architecture greatly benefit from Vitruvius vision of recording the science, art and history of architecture. 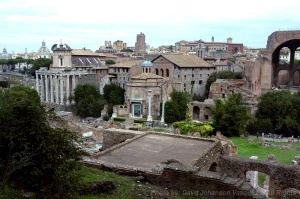 How Did Rome’s Vitruvius, Become The World’s First Subject Matter Expert (SME) on Architecture? —More to be uploaded on Vitruvius in the coming days.

Links to learning more on Vitruvius