David A Johanson is a multimedia specialist, CTE instructor and former Boeing scientific photographer. All images and text were created by the author.

All photographs featured in this photo essay were taken in the Pacific Northwest during the winter season, using low-light, natural illumination. The camera used was a Nikon D700.

As a filmmaker and photographer who uses many forms of light, low-ambient-light has always been a rare delight.  “Magic hour” also know as golden hour, is a term cinematographer’s originated for the holy grail of eye-candy lighting. This dramatic, low-angle light begins minutes before sunset, then dramatically merges into dusk, before entering the realm of twilight.

Magic hour was the gateway for me to explore and develop a passion for this wonderful transcendental light. After sunset, the busy activity of the world begins to wind-down… becoming still, before renewing itself for a new day. When twilight arrives, it presents opportunities to observe and record subtle events, which many of us are not aware of as we dream part of the night away. Digital technology has recently entered a new threshold by producing a select breed of cameras, capable of capturing this marvelous luminosity.

What I relied on before the recent advance in low-light digital imaging is a process termed: HDR photography (High Dynamic Range.)  Basically the technique requires a steady tripod for a camera to take a series of images; typically three to eight exposures are taken of a scene.  At least one image of the scene is under exposed; another exposed for what the camera or light meter indicates as a “correct” exposure, and at least one final, over-exposed image completes the HDR series. The intent is to record the entire range of tonal values, from the subject of interest.

Unlike the human eye, which is our unique window for visualizing the world — most camera light sensors lack the sensitivity to record a wide range of tones within the frame. Typically, if only one exposure is used to record a scene with normal or high contrast, the Camera’s light sensor will compress some tonal values, with tones being lost either in the high or low-end of the scale. HDR photography attempts to solve this limitation by combing multiple exposures to record a more dynamic range of tonal values, which later can be combined to create one image in post-production. The results produced with the HDR process are vivid photographs, which present an image closely resembling our initial impression of a scene. 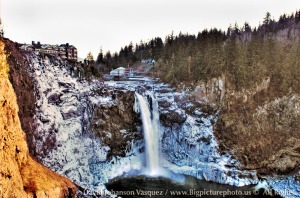 Of photo pros I know using HDR applications, Photomatix, has been popular for the past few years. It’s a powerful tool, with flexibility and control to help produce impressive results.  Another favored choice for a HDR app, is found bundled within Adobe’s Photoshop.

An acquaintance recently sent me a YouTube link for promoting Nikon’s HDR software. What I saw featured in Nikon’s video was over processed, over-the-top HDR images.  Perhaps it’s a good app, but the promotion relied on too much eye-candy for my taste. In conversations with fellow photographers and multimedia producers the question becomes — at what point does a skilled technique turn into a gimmick?  Some viewers go gaga for the over processed look, with an image appearing unbelievably surreal, and more suited for an illustration or painting.  As with most pursuits, moderation offers the best results at the end of the day. Taste is all subjective, however, for photography, I prefer an image which retains a photo quality character, versus an over-saturated illustration. Perhaps in our contemporary digital media environment, which presents a constant tsunami of image content, there’s a perceived need to push the limits of effects. Okay, I’m finished with my soapbox moment, of the good, the bad, and ugly use of HDR photography.

I still enjoy using HDR technique, but now more sparingly, since I found a camera capable of producing a dynamic tonal range image,  from a single exposure of low-light environments. 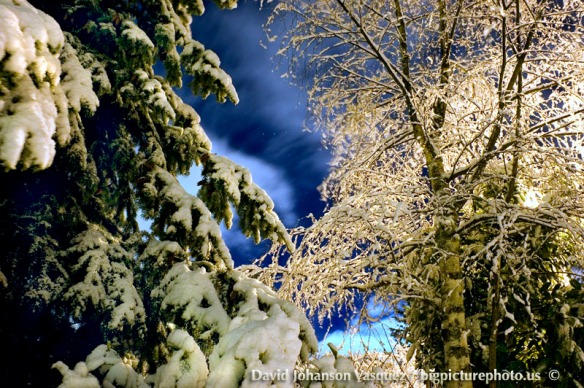 Occasionally we’ll have powerful snowstorms roar through the Puget Sound area, which presents some exciting, low-light photo opportunities. One evening, at midnight the conditions were perfect for night photography, with crystal clear visibility. Graceful, fast-moving clouds were gliding overhead, then suddenly, an opening appeared to reveal a splendid shimmering of stars from above.

These featured “night snow images” were delightful to capture, as they revealed an enchanting, dreamlike quality to them. The reflective character of snow, also creates a subtle luminosity on the surrounding frozen landscapes. A blend of moon and starlight filtered through shifting openings of clouds, which merged with street lighting to create an infrared-photographic look. All these snow scenes were created from one exposure, made possible by using my low-light Nikon D700 camera.

Here’s some technical photographic information about low-light photography. Nikon’s D3s is the current leader in high ISO for low-light environments, using the second-generation of full frame, FX sensors. The Nikon D3 and D700 produce the same image quality as each other, with both featuring Nikon’s first-generation full frame, FX sensor cameras.  Surprisingly, Nikon designed the D3s with the same 12+ megabyte resolution as the D3, instead of doubling the amount of mega-pixels. By not inflating the pixel count, it allowed for the same pixel size or “pixel pitch” as the D3 and D700.  Apparently, this matrix extensively increases sensor sensitivity. Currently, FX sensors are the masters of low light by out performing DX sensors by 3 stops.

If you decide to try low-light night photography, be prepared for challenging conditions and dress to keep warm. Whether you choose to use HDR techniques or single image capture, get ready to discover the wondrous illumination, that low-light photography will reveal to you.