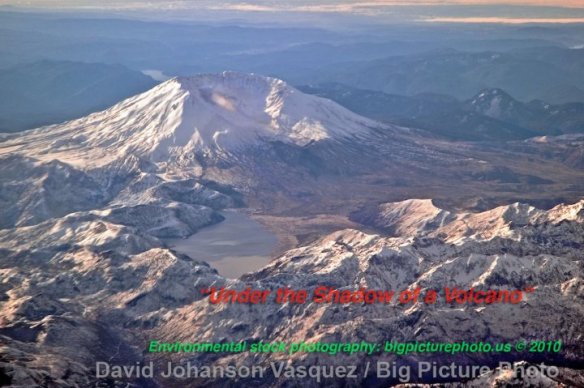 Observing the 33rd anniversary of the Mount Saint Helens eruption, which had occurred on Sunday 18th of May 1980 at 8:32 a.m. on a clear sunny morning.

Photo essay by: David A Johanson © All Rights

Flying off from Seattle to see family in San Francisco, I peered out my window to catch a sunrise falling on the north face of Mt. Saint Helens. In the photograph, a fresh plume of ash is seen spewing near the center of the crater after some renewed volcanic activity. Spirit Lake, partially frozen in the foreground sits at the base of an active volcano. I’m humbled every time I see this famous stratovolcano, because of a close encounter I nearly had with it on the weekend it violently erupted.

After graduating from college, I received a job offer from KING Broadcasting’s KREM TV, in Spokane. While working at the station, Mount Saint Helens dramatically awoke, focusing the world’s media attention on her mysterious activity. The volcano’s rumblings increased sharply over a few weeks and was building momentum, just before I was planning a weekend visit to Seattle to stay with friends. Having access to the station’s motion picture cameras, I made preparations to use part of the weekend for filming Spirit Lake, which sat under the shadow of the volcano. A feisty character, named Harry R. Truman, operated a lodge on the lake and I imagined it would be a great human-interest story to interview him in regards to all the Mountain’s activity.

The art director at the TV station, Bob Takeshita, was a good friend, so we made plans to work on the project together. The weekend arrived for going to Seattle, and the weather had cleared, making it ideal for filming at Spirit Lake. To my disappointment, the art director informed me his wife didn’t want him to go that weekend. Since the plan was for us to work as a team, I let him know, I wasn’t going to hall all the camera gear up the mountain by myself—so we would have to postpone the shoot for another time.

Arriving back in Seattle, I was still disheartened by not going to film at Spirit Lake with such ideal weather. That night, I had this strange dream of being back in Spokane, where I was at my favorite lookout point, getting ready to take some photographic panoramas of the skyline. As I put the camera on the tripod, a clear spring sky turned suddenly dark. It was all vivid and so strange, but what made it even more surreal is… it began snowing gray powder flakes in the warm air as the ground disappeared underneath deposits of gray powder dust. Waking up in the morning I though how odd that dream was from the night before, but soon forgot about it as I had a busy day ahead of me.

As fate would have it, the following morning on May 18, 1980, Mt. Saint Helen’s, erupted with the force of several atomic bombs… burying my intended interviewee, Harry Truman and his lodge under hundreds of feet of volcanic debris. And the dream I had, was a premonition of ash from the eruption, which did make it to Spokane and deposited a blanket of ash, just as I had seen. Interestingly, no geologist or scientist had predicted if an eruption did occur, the result would be…a massive cloud of ash, blanketing hundreds of square miles in gray ash.  It was several days before I could get back to KREM TV, because the mountain passes were closed due to hazardous driving conditions caused from falling ash, which deposited ash on 11 states and parts of western Canada.

I never got a chance to thank my friend’s wife for not allowing him to go with me on that fateful weekend. If I get over to the Spokane area again, I’m going to look my friend up and bring his wife a belated bouquet of flowers for inadvertently saving our lives. ~